A Tale of David and Goliath

Lucid Motors, the luxury electric vehicle (EV) manufacturer, was set to make its global debut at the New York International Auto Show 2020 when then the pandemic hit. With the cancellation of the tradeshow, it meant having to find a new way to officially unveil the Lucid brand and its first car, the Lucid Air. Forced to pivot, Lucid had to act quickly – moving from the benefit of the auto show’s built-in audience – to their own, virtual launch event. Compounding the challenge, a number of EV brands were getting a lot of media attention – with three going public in a span of three months and, of course, there was the behemoth in the space, Tesla. Despite all this, the objectives were clear – drive awareness for the Lucid Motors brand and help drive pre-orders (reservations) for the Lucid Air, luxury EV sedan, ahead of its 2021 commercial availability.

Lucid had just partnered with LEWIS as its official agency of record and the two worked to pivot to a new strategy to get global attention. In looking at share of voice, it was clear that Tesla was the leader in the category. While others in the industry attacked Tesla, it was decided that Lucid would pursue a different tactic. The team flipped the approach and instead of going after Tesla, Lucid chose an approach of David AND Goliath. Using a “gravitational assist” from the household Tesla name, the strategy was designed to boost pre- and post-launch buzz by positioning Lucid and Tesla, helping to further the EV industry. Essentially, the communications team used the awareness and the media’s interest in Tesla to launch its own awareness campaign and then left it to the media to decide the outcome.

Leading up to the rescheduled launch, Lucid Motor’s CEO, Peter Rawlinson’s messaging was designed to layer a sense of camaraderie, insisting “please don’t call us a Tesla killer” and how Lucid and Tesla could “live alongside” one another. The pre-launch media activities garnered buzz around the globe. Ultimately the momentum delivered a launch that was a resounding success, with results appearing across earned and owned channels: 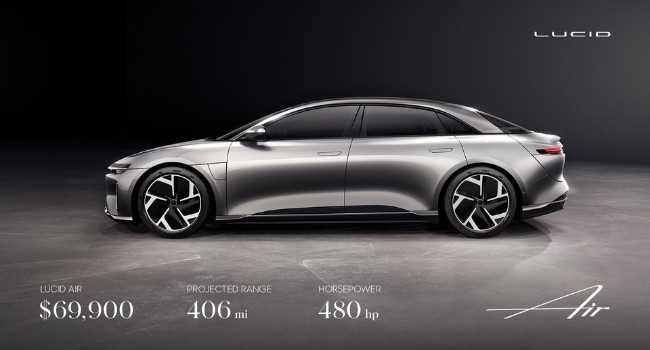