“THERE IS NO FUEL SHORTAGE!”

These words, accompanied by an emoji of a tiny car, were shared by Secretary of State for Digital, Culture, Media and Sport (DCMS) Nadine Dorries in response to the apparent lack of gas in petrol stations across the UK. Comments of similar substance were shared by a number of her colleagues in government. 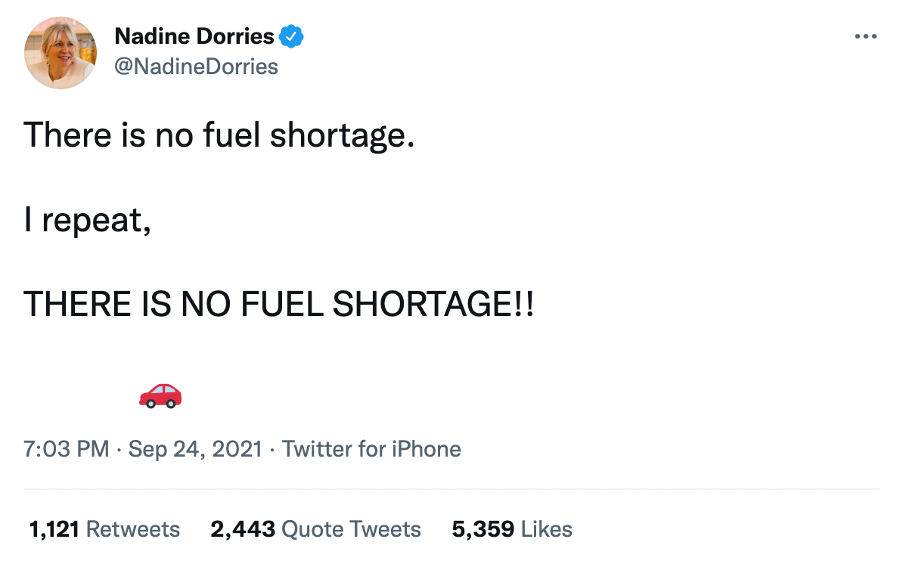 At the time, Dorries’ statement was more or less accurate: there wasn’t technically a shortage of fuel, but rather a lack of HGV drivers to deliver said fuel to petrol stations. This message was also vitally important since misleading information being shared was leading to the proliferation of panic buying, which would in turn result in a genuine shortage.

Unfortunately, that’s exactly what happened. Now, the crisis that was being hailed last week is here in earnest, with 90% of petrol pumps reported to be running dry.

The attempts to put an end to the petrol panic buying that was taking place across the country seemingly fell on deaf ears. This particular “all caps” tweet was even considered by some to be inciting exactly the fear that it was trying to assuage – after all, all caps is widely recognised to be the internet-equivalent of shouting.

From a strategic perspective, the best approach in the case of the DCMS Secretary is to simply avoid commenting on whether or not there is a fuel shortage. After all, that’s a subject best left to the Transport Secretary, whose job it is to address such challenges.

However, if we consider the comment purely in terms of its messaging, it wasn’t the shouty tone that failed to address the issue at hand effectively – it was the way that the denial of this false information was constructed.

Research into how humans respond to certain kinds of phrasing holds the key to dispelling false information. When confronted by something that we believe to be false, our instinct is often – as in the case of the DCMS Secretary – to refute this statement outright: we announce that “THERE IS NO FUEL SHORTAGE!”, and share an emoji of a tiny car for good measure.

Although this approach does deny the existence of a fuel shortage, it doesn’t work as well as you might think. A quirk of human cognition means that we struggle to process these kinds of negations (that “X is not Y”). [1] In practice, the statement “THERE IS NO FUEL SHORTAGE!” leaves us with the association between “fuel” and a “shortage”, potentially reinforcing the idea that it’s trying to refute.

So, what’s the alternative?

If it is necessary to comment on false information, it’s much better to make a distinct, positive statement that doesn’t lead to any of these problematic associations. For example, you could announce that “THERE IS ENOUGH FUEL”. Even if you go on to acknowledge the existence of supply chain challenges, the fundamental nature of the statement serves to dispel false information, rather than reinforcing it.

It would be foolish to suggest that, if worded differently, the tweets of a few government ministers would have prevented a national fuel crisis. Indeed, it would have been best if some of them had refrained from commenting in the first place. And yet, there are still lessons to be learned about how we should approach messaging in the face of a crisis.

This isn’t the first time we’ve had to contend with rampant panic buying – images of people rushing to stockpile toilet paper in the leadup to each and every COVID-19 lockdown are still fresh in our minds.

It isn’t the first time false information has led to adverse outcomes either. For that, we need look no further than misinformation surrounding the safety of the COVID vaccine.

Whether you work in government, or in a business or charity, it is vital to be equipped with the communications tools to deal with false information effectively. If tackled correctly, a statement should be able to refute a falsehood without inadvertently reinforcing it in a reader or listener’s mind.

What’s your strategy to deal with a PR crisis? Contact us for expert crisis management advice you can count on.